Sports keep me healthy and refresh my mind, so I tended to join a sport club.

Besides, I would like to practice my Japanese language within a full Japanese environment. Therefore, a club with more than 90% Japanese people will be great.

Furthermore, if I want to join a sport club, a sport that I’m familiar with will be better since I was much older than the college students.

Then, without the purpose of winning in official games, I avoided university teams. Some easy-going club will be better.

With a great technology called internet, it was never difficult to find a college sport club.

I found a club called “Soft Volleyball Sunset” in my university and sent a mail to the captain to ask for visiting.

Although I know nothing about the difference between soft volleyball and common volleyball, I visited after received the approval from the captain.

That was so funny!!

Foreigner is only me. I was able to practice Japanese fully and do sport fully with the additional benefits of expanding social relationship and living area.

I felt so satisfied and continued 2 years from the first day.

Now the club has been operated for more than 10 years! At that time of my attending, it was so young as in the 3rd year since establishment.

I believe I’m still the oldest one in the whole club now, haha. (since I was already the oldest member at that time due to more studies as a foreign and graduate student) 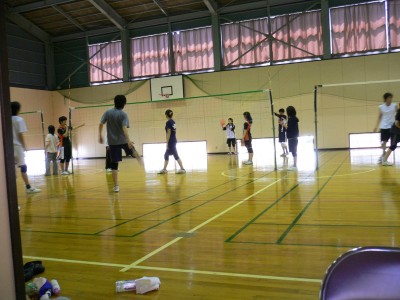 So, what is soft volleyball?

Just like it is named, the ball is softer than the common volleyball. The size is around 30% bigger. Although it’s said that it’s not painful to be hit by the ball due to the softness of the ball, actually it’s sometimes quite painful. Haha…

A team is composed of 4 members, which is fewer than a general volleyball team.

Then, the court used is a badminton court, so the area everyone covers is not really wider than general volleyball.

Since I had played male volleyball for many years, I didn’t felt difficult to hit strong spike even without full-power jump.

As a result, a place where I can do sport, where I can practice Japanese without extra stress is exact a great place for me.