Many games were played, too.

One impressive game is to say the directions.

In eastern Asian countries such as Japan or Taiwan, English teachers are used to teach directions by saying “turn right” is to go right and “turn left” is to go left. Memorize these words today and we’ll have an exam for these tomorrow”.

However, there were no tests so far in this Finnish class. The teacher replaced exams by playing simple and funny games.

The direction game was played by a pair of students. One student draws a curved road with any kind of shape he/she wants. Then the other student holds a pen and place the pen at the entrance of the road with his/her eyes closed. Then this student starts to move his/her pen under the instruction given in Finnish language from the other student.

So this is like a practice of saying and listening to “turn right, turn left, go straight” for more than 50 times in 5 minutes!!!

It was very easy, very funny and made students to practice many times in a short time.

In fact, thanks for this game, I can remember the words of ”turn right, turn left, go straight” in Finnish without memorizing at home. 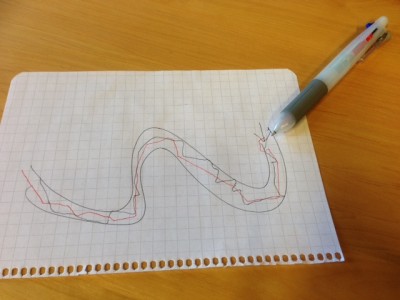 There was another interesting game.

That was a game to practice how to use “from, at/in, to”.

We were given a paper with a figure of a long and cured road. There are many names of cities on this road. We were separated into groups with 3~5 people in each. Then we started to play by throwing 2 dices to decide which city to go. After that, the player needed to say “where you are from, where you are in and where you’ll go to”. Every time you will say different names of cities and say “from, in and to”, so everyone can practice how to use “from, in and to” in Finnish for many times in this game accompanied with lots of funs.

What do you think about this? Interesting?

I think this is the magic to make learning interesting.

The last part is our homework.