It’s a seminar, again…
I feel I’ve gone to so many seminars recently.

It was organized by Hibiya College, a public organization, at Hibiya Cultural Library.

I expected more young people to come since they will stand at the center to drive Japanese society in the future.

The speaker was President Yasuyuki Kamada, the CEO of Kamakura Investment Incorporation.

It has been 5 years since establishment and was run as a style of a NPO organization.

His company only receives money from individual investors who agree with his believes.

President Kamada believes Japan is getting worse and worse due to the aging population and downhill finance. The way to solve them is revolution of national financial system and driving growth of enterprises.

In order to drive enterprise growth, innovation and creation are necessary. However, the more important thing is to find and support those “good companies.”

The definition of a “good company” is, “contribution to the society, employees and shareholders and to be recognized as a good company by people around.”

This is his philosophy for his company.

He would never sell the companies invested and keep holding the stocks for continuous support. He never invests only for profits but also invests and supports those companies contributing to the society.

Why does he want to do so? 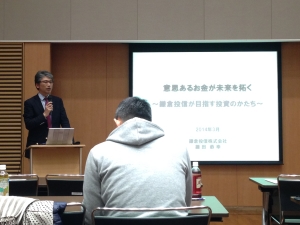 Generally speaking, most investment banks or venture capitals are working only for profits. They always invest in speculation business and never care about the society.

Since it is estimated that there are around 70 trillion yen (700 billion USD) deposit money in Japan, even just only 1% were used to grow good companies in last year, 700 billion yen (7 billion USD) would have been driving Japanese economic and society now.